Safe Inside the Storm

My water broke early on the morning of Saturday, April 6, 2002. It wasn’t much, just a trickle, and there were no contractions yet. So I got up and went to some garage sales and spent the rest of the day straightening the house, resting, and playing with the kids.

Contractions started at some point during the day, but never got regular. I continued leaking fluid and having irregular baby hugs until Sunday night, the 7th. By 9 pm they finally settled into a rhythm of about 10 minutes apart. A thunderstorm began brewing outside and I knew it was going to be a wild night. As we lay in bed, contractions began getting stronger, while outside lightning flashed and thunder boomed. I felt myself being drawn into the storm….there was such a sense of primal earthly power laboring in the dark alone while my husband slept.

By 1:45 am they were strong enough that I needed to get up and move around a bit. I woke Kyron up around 3 am needing his help. We turned on a dim lamp in the bedroom, and prepared the bed with plastic covers and sheets. I had planned on laboring in an inflatable pool if it felt right, but after getting in the shower I realized I wanted away from the water during contractions. Kyron was a bit relieved that he didn’t have to fill that pool after all!

By 5:30 am Connor, our four-year-old, woke up and joined us. Kyron couldn’t take care of him and me both, so I called my mother and she was here by 6:30. By this time, I needed everything I had to stay focused and relaxed. I remember thinking that I would probably labor on for several more hours, not giving birth until maybe by afternoon. I’ve always had long labors, so I was mentally prepared for it.

Around 7:30 I hollered out to my mom, “How do you know when you’re in transition?” She was quiet for a moment then answered, “I don’t know, sweetie.” (She knew I was there, but she knew I didn’t want to hear it.) Kyron said, “Honey, I think you’re in transition now.” No I couldn’t be, I argued, “If I were in transition, I wouldn’t be talking sensibly to you right now!” I also remember feeling so in tune with what was going on in my body, I could actually feel a pulling sensation at my cervix during these strong contractions. I’ve never been aware of that before. I also found that if I dropped my jaw and moaned a low, deep OOOooooohhhhhh, during these intense hugs, I could feel a connection between my mouth and my cervix. I tried just blowing through a contraction once, and it was absolutely painful, in fact, I couldn’t catch my breath. So, back to deep moaning. 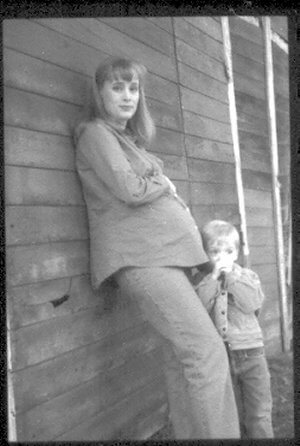 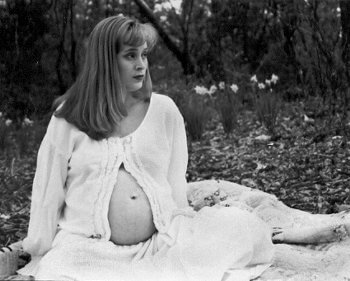 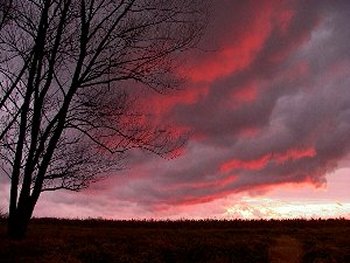 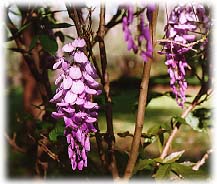 At some point I told Kyron it was time to wake up our 7 year old, Audrey. She stayed in the room for a while watching, and during a rest I asked her if my moans scared her. She smiled and said no. Then things really picked up and I could feel that strong pressure on my tailbone along with that familiar out of this world stretching sensation. I was on my knees at the side of the bed and I told Kyron, “It CAN’T be time for the baby yet, it hasn’t been long enough!” I felt inside of me and couldn’t feel a head yet, which actually relieved me. I was in such denial that birth was so imminent! A couple hugs later and I started feeling that urge to panic – I knew that feeling and it meant birth was moments away. I felt inside once more and this time felt a head just a couple inches inside!

“Momma! I can feel the head!” I yelled. She and the kids filed into the hallway so they could see the birth. I had to get off my knees, so I stood up, turned around and sat on the very edge of the bed with my feet apart, planted on the floor. I leaned back a bit and supported my weight with my arms behind me. Kyron got on the floor between my legs and suggested I move into a better position, perhaps in a squat. A fearsome voice that I hardly recognized as my own screamed/shouted “NO!!” Wild horses couldn’t move me at that point. He tried again, this time trying to reason with me that he didn’t think the baby would be able to come out the way I was sitting, and my legs weren’t far enough apart…etc. I was barely able to get out the words, “YES!!! NOT MOVING!!” One push and I heard Audrey exclaim “I see the head!” With the next push his head was out! A rest for a moment, then I told Kyron, “Get ready, it’s coming!” and his body slid out quickly. Kyron immediately handed the baby up to me. He began breathing and gasping at that point and I started bawling, I was SO HAPPY!

I looked down and saw he was a boy, and laughed – I was convinced he was a girl all along! The cord was very short, so I couldn’t put him to the breast just yet. I held him for a while, then felt the urge to push the placenta out within about 15 minutes. I handed the baby to Kyron and stood up while holding a bowl between my legs. A huge placenta came out within minutes, but not all the way. It stayed attached by the membrane. So we decided to be patient and hopefully it would detach on its own in a few minutes. After 20 minutes, it was just too awkward. So we cut the membrane, leaving an inch or so hanging out.

To make the placenta story short, that piece remained firmly attached up there for 24 hours. And during that time I kept having unbelievably painful, long, afterpains. I took a high dose of homeopathic silica that evening, and by the next morning, I was able to work the piece of retained placenta out. After that, my afterpains stopped.

I did tear in two places, but it has healed on its own now.

After the excitement and rush of having the baby settled down, I looked out and noticed the storm had died, and the sun was breaking through the clouds. We have a profusion of wisteria vines covering our oak trees in the front of the house, and the storm had blown millions of purple petals onto the ground and driveway. But Audrey had a more poetic explanation. After cleaning myself up and settling into bed with Zane, Audrey came bouncing into the bedroom exclaiming, “Mom! The fairies knew our baby was coming last night and they covered our driveway in flowers to welcome him!”

I have already had two midwife assisted births, and this was my first unassisted birth. It was also by far the smoothest, most enjoyable birth I’ve ever had. I decided I wouldn’t check dilation because I didn’t want to ever feel discouraged, and I also felt that it might’ve kept me from being completely in tune with my body. I also decided not to time any contractions – I didn’t want to be focused on a clock; again, something that may have taken me away from my body. I believe that played a key role in making my labor fly by so fast. And just being able to labor in the dark, on my own, without attendants making suggestions or bustling in the background made this birth a sacred event. If I could do this birth all over again, I wouldn’t change a single thing…except for maybe putting another piece of plastic over the side of the bed – I got blood on my brand new bedskirt. 😉

The Birth of Albion

The Gentle Birth of Bethany

They Don’t Call it a Peak Experience for Nothing