There – that has answered most of the questions one tends to ask, but doesn’t even begin to explain the incredible arrival of our first grandson. He wasn’t exactly an immaculate conception, but Sam has chosen to bring him up herself, for the present anyway. His father Erik is living in Hawaii, but is keeping in touch.

As you probably know already, Sam has chosen to live a slightly different way of life from most of us. She has pretty well rejected structured society so most of what she does is somewhat unconventional, including motherhood. During pregnancy, she kept very fit, gathering the herbs she needed for teas recommended for pregnant mothers. She ate organically, on the whole, except for occasional binges on Ben & Jerry’s ice cream. She stretched and exercised so that her body put on virtually no bulk, except for a huge watermelon bulge in the front. From the back one could hardly tell she was pregnant.

By the time she was 7 months pregnant, I had to absorb the fact that she wanted neither doctor nor midwife at the birth. She was going to do this herself, as mothers have done for thousands of years. She wanted me to be there, but I knew I couldn’t unless I could get rid of my own anxieties and all the questions of “what if?”.

As it turned out, I went down a month early as Sam had a false alarm. This was great as she and I had time to read various childbirth books together, to talk a lot, to ask questions of a local 85 year-old midwife and for me to learn more about her life style and philosophy. It was extraordinary how much unlearning I had to do to feel comfortable with the idea of unassisted childbirth. I also had time to help her get her nest ready.

She wanted a private place to birth, as the house she and her friends share has only two large rooms and often 10 or 12 people living there. She finally had to reject the idea of digging herself a round house with a dome of old bottles. There wasn’t enough time and I put my foot down about her doing heavy work the last month. The old teepee poles, sitting in a nearby field, started her thinking about that as a possible nest, which was confirmed when two of the girls came home from a trip having been given a very ancient teepee cover, bearing the words, “Buffalo River Fur Trading Co.” Sam immediately started trying to mend the holes and paint out the sign, which was somewhat offensive for a vegetarian.

She got the cover into the poles, but the first night we tried sleeping in it we nearly froze to death. The wind howled through and under the sides. Hay bales were needed to block some of the wind. Then blankets were needed to create a sort of lining which Sam found at a thrift store in Sante Fe for $10. Next stones were carefully selected in the stream and dragged up the hill to create the firepit. Sand was brought from a nearby river, to protect the surrounds of the firepit. Sam made beautiful mobiles of driftwood, which she had collected over the year. Friends of hers sent other mobiles and made dreamcatchers for her to hang in the teepee. The night the last thoughtful detail was finished, she started labour.

I had gone to bed early in a little tent I had found that morning in the woods. It belonged to one of Sam’s friends and had blown half a mile away in the storm. I set it up fairly near the teepee in case Sam needed me. Late that night she and her friend Brad had decided to light the first fire in the teepee and play the drums. Around 2 a.m. I heard Brad calling me, “Mama, I think Sam needs you.” She had had two contractions and was already having them close together. Brad went to fetch water, a pan, olive oil and my emergency bag, which I had been carrying around in the car, wherever we went. He took the dogs away, and Sam asked him if he minded leaving as well. There were just the two of us. I stoked the fire, then sat behind Sam so she could rest on me between contractions. I have never felt closer to a human being in my life.

For the final stage of labour, Sam chose to be on hands and knees, with her butt facing the fire. This was when her waters broke. I busied myself keeping the fire going, which provided not only enough heat, but also reasonable light. I washed her, oiled her and got the necessary things together. I was able to give her a progress account as Birdie began to come into the world. She was concentrating hard on not pushing, as she wanted him to enter under his own steam. She did beautifully. At one stage she was singing what seemed to be an old Indian chant. After his head had crowned, she asked me to oil her again. I said it was pretty impossible to do a good job of it, because his head was pressing on the perineum. Amazingly, she was able to let him slip back inside, and allow me to apply more olive oil. She was so well basted by the time she gave birth that she didn’t tear at all.

I had one moment of “Oh help!” which almost immediately left me as I looked up at all the evidence of love, support and affirmation, hanging in the teepee. I knew that nothing could go wrong in such surroundings. That “knowing” was very powerful.

I was protecting his head from the heat of the fire, when he slipped into my hands. His fingers unfurled from his chest like young ferns. He appeared down to his waist, then Sam decided to have a rest! There was nothing wrong with his lusty cry. He soon found his fist and was trying to suck. For about five minutes he remained half born, then with a whoosh, he arrived completely into the world.

When we figured out how to get Birdie to Sam’s arms, without too many gymnastics, we just hugged and cried together. I then tried to cover her with warm blankets as she was shaking with effort and feeling cold. She was also hungry. I went to get tea and oatmeal from the house. They were all sleeping except for one of the boys, who helped me find what I needed, and another who sleepily murmured “Wow! Oh, awesome!” I went to the car to see what time it was. It was 5:15 a.m. The full moon was still in the sky. We think that Birdie was born about 4:45, which meant that labour lasted between two and two and a half hours. We only had the moon to go by so we weren’t too sure. The whole process was so beautiful, mystical and natural that time keeping was not an issue.

Sam was looking more comfortable when I returned and drank and ate. Birdie was peaceful with only the odd fussing, now and then. We waited for the placenta to be born. When it was, I tied the knot as instructed by the old midwife and Sam cut the cord. There was not a drop left in it.

I have never seen such a beautiful morning. I walked back to the house to tell the family the news as the sun rose, flooding the hills with rich amber light beneath the setting full moon. The world was glowing.

Sam was born by Caesarian Section, almost entirely due to the fact that the doctor wanted to induce me so that he could go on holiday. I feel utterly blessed that I have had the opportunity to experience birth with Sam, finally, after 21 years. We both felt that the situation could not have been better. 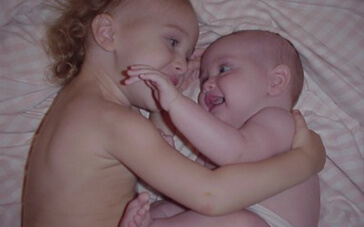